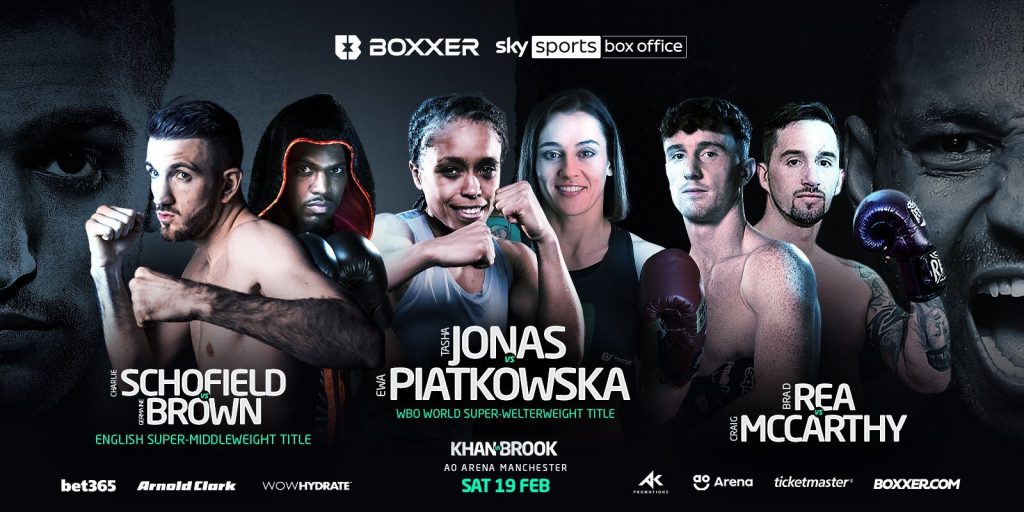 Manchester, England – (January 27, 2022) – The already-packed undercard for BOXXER: Khan vs Brook solidified its heavyweight status today with the announcement of three further key fights added to the line-up for Saturday, February 19 at the AO Arena Manchester, live on Sky Box Office.

The card’s contingent of Olympians now doubles with the addition of Liverpool sensation Natasha ‘Miss GB’ Jonas, who blazed a trail for women’s boxing in 2012 when she became the first British female to box for Britain at the Olympics.

With more than half of Jonas’ wins coming by way of stoppage and Polish phenom Piatkowska having ended a quarter of her bouts early, the judges may not be needed when the two world title contenders meet in the middle of the ring next month in Manchester.

Having made history twice – first as the first-ever female boxer to compete for Team GB and then, three years later, as Britain’s first female boxer at the 2012 Olympic Games – Jonas’ ferocious fighting style made her a firm fan favourite when she eventually crossed over to the professional ranks.

As a professional she has twice challenged for world titles, receiving a controversial draw decision against WBC and IBO champion Terri Harper in 2020 and taking bitter rival Katie Taylor the distance in 2021. Third time will be the charm when Jonas enters the ring next month.

“Before I signed with BOXXER, my management MTK and I had a meeting with Ben Shalom and told him what my goals and ambitions were and what I wanted to achieve before leaving the sport. I knew it wouldn’t be easy with so many champions tied up but Ben assured me he would make it happen and he hasn’t let me down,” said Jonas.

“I know it’s a big risk but those risky fights have brought out the best in me and I’m ready. I’m looking forward to it, it couldn’t be on a bigger show for north-west boxing and after I’ve boxed I’ll be in the crowd myself to enjoy the main event. I am over the moon and I don’t want to step up and get that world championship.”

Ben Shalom, BOXXER Founder and CEO, said “Natasha Jonas has been a pioneer for female boxing in the UK and we’re delighted that we were able to deliver this opportunity for her to add a major world title to her outstanding list of achievements on what will be the biggest British boxing card of the year.”

Adam Smith, Head of Boxing Development at Sky Sports, “It’s absolutely fabulous that Natasha Jonas, one of our leading fighters, has a golden opportunity of lifting the world title on such a huge occasion. This is once again a tough challenge for Tasha as she must get through highly-regarded former world champion Eva Piatkowska. It’s a cracking chief support fight on the massive Khan-Brook card and a wonderful chance for Tasha to make her boxing dreams finally come true.”

Following an incredible October battle with Jez Smith – a 2021 Fight Of The Year Contender and instant classic – Manchester’s Brad Rea returns to the ring for an eight-round rumble with undefeated Irish southpaw Craig McCarthy in what is a very evenly-matched fight which the night’s best man will win.

With neither Rea nor McCarthy being fans of taking a backwards step, another classic firefight could be on the cards. The hometown crowd will be behind Rea but McCarthy won’t be alone either: Manchester has one of the largest Irish populations of any city in the UK, with an estimated one-third of the citizenry drawing some form of Irish descent.

A vocal army of supporters will be in attendance when Manchester man Charlie Schofield enters the arena to make his first defence of the English Super-Middleweight Championship. Schofield won the belt with a shutout win over Mickey Ellison in June last year and is intent on a triumphant night for himself and the home fans.

Seeking to spoil the party is Germaine ‘G-Man’ Brown. He’s gone 2-0 under the BOXXER banner, with both of those fights taking place at the famed Wembley Arena in his home city of London. Now a hostile crowd and a cold welcome await him as he heads north on a mission to dethrone the Mancunian on home soil.