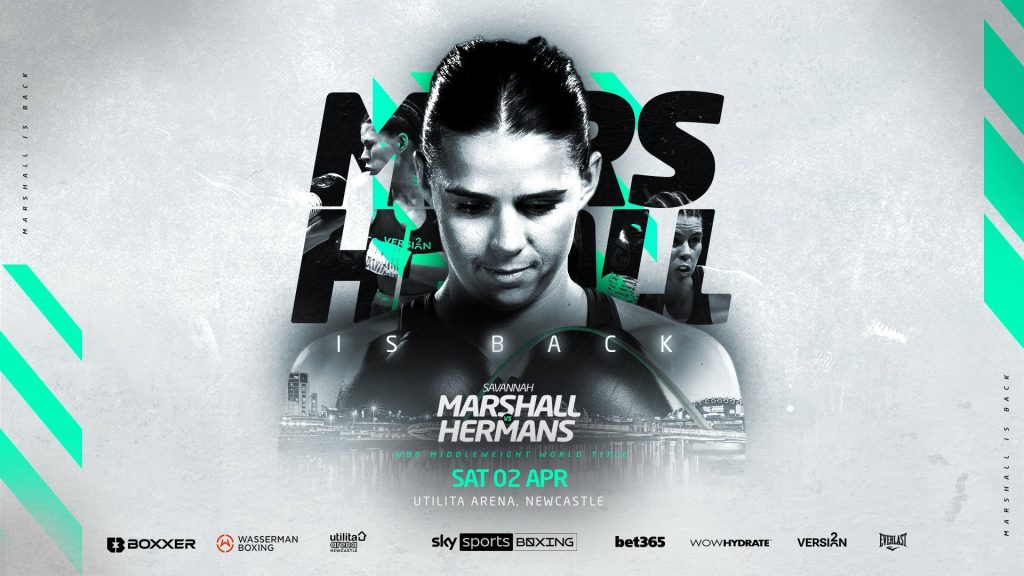 Florian Marku Marches North To Kick Off His 2022 Campaign

The show, previously scheduled for March, will be a co-promotion with Wasserman Boxing and take place at Newcastle Utilita Arena, which in October hosted Marshall’s stunning second-round stoppage of Lolita Muzeya. That win maintained Marshall’s undefeated record, extended her run of stoppage wins to seven and kept the WBO World Championship belt around her waist.

Earlier this month, Marshall was in Cardiff to watch bitter rival Claressa Shields defend her world championship titles against Ema Kozin by unanimous decision. When the American star exited the ring, she and Marshall became embroiled in a war of words, raising tensions between the two to fever pitch.

Marshall must now ensure she defeats the dangerous Hermans (12-3, 5 KO’s), the current EBU European Female Champion, to set up one of the most long-awaited showdowns in recent memory and the biggest fight in the history of women’s professional boxing.

Belgium’s Hermans is a tough and experienced operator who previously took Shields the distance when she challenged her for the unified WBA, WBC, and IBF World Female Middleweight titles in 2018 and will be hoping to secure a rematch if she can beat Marshall in Newcastle.

“I’m really happy to be going back to Newcastle Utilita Arena after the amazing reception I received there last time. Femke is a very tough girl and it’s going to be a hard night’s work but I’m really looking forward to putting on a show. I’m sorry to anyone who has been inconvenienced by the date change but I hope everyone who wants to be there can still be there. I really can’t wait,” said Marshall.

Also confirmed for Newcastle is “The Albanian King” Florian Marku (10-0, 6 KO’s), competing in what will be the first bout of his new exclusive contract with BOXXER, in a key domestic encounter with former British and Commonwealth Champion Chris ‘Rock n Rolla’ Jenkins (23-4, 8 KO’s).

Marku maintained his undefeated record in November and showcased his cerebral boxing skills as he steadily outpointed Jorick Luisetto, while Jenkins is coming off an emphatic decision win over former unified super-lightweight world champion Julius Indongo in Cardiff earlier this month. The winner takes a big step closer to competing for major title honours later this year.

“I’m excited for my first fight of the year, it’s going to be the start of very big things. I love fighting in new places so I’m looking forward to entertaining the amazing Newcastle fans and showing them my brand of fighting,” said Marku.

“Chris Jenkins is a good opponent. He’s won championship belts in Britain and he’s just beaten a former unified world champion. This will be a tough fight between two warriors. This is an important year for me – I’m looking to make a big statement at the Utilita Arena and put the rest of the 147 pound division on alert.”

Jenkins added, ‘At this stage of my career, I want the biggest fights available to me.  Marku is a good fighter who also has a big following. I can’t wait.”

Having signed promotional terms with Wasserman Boxing, Nantwich Heavyweight Nathan Gorman (18-1, 12 KO’s) is back in action as he looks to kick-start his promising career with a statement win against Scott Alexander (16-4-2, 8 KO’s).

Gorman, the former WBC International Silver Champion, will return to the ring for the first time in over a year following his second round TKO win over Pavel Sour at London’s Copper Box Arena on 27th March 2021.

The 25-year-old is looking forward to a period of activity as he targets domestic titles and world rankings, starting with a tough test in the North East against 32-year-old LA-native Alexander, who has previously gone the distance with Heavyweight contenders Carlos Negron and Travis Kaufmann.

“I’ve been out of the ring for a year so I can’t wait to get back out under the lights,” said Gorman. “It’s an exciting time for me. I’ve got a big brand backing me in Wasserman and I’m fighting on a huge platform with Sky Sports. This is a new adventure for me and I can’t wait to get started.

“Scott Alexander is a decent opponent. He’s been in there with some good names, and he’s never been stopped. If I give a good performance and get the stoppage that will send a statement to the Heavyweight division.”

“I’m focused, ready, and excited to fight in the UK, they have great fans and an amazing atmosphere,” said Alexander. “I’m grateful for the opportunity and I’m looking forward to showcasing my skills to the boxing world and demonstrating that I belong in there with the best in the heavyweight division.”

Ben Shalom, BOXXER founder and CEO, commented, “We can’t wait to return to the Utilita Arena on April 2 and feel the incredible atmosphere and buzz of the Newcastle fans. This is a crucial fight for Marshall – she has to beat the dangerous Femke to secure the ultimate showdown with Claressa Shields. Last time it was a really special night with Marshall’s incredible win.  When the Utilita became available we knew that we wanted Savannah to headline a big arena on a big show and we’re returning with a great card featuring Marku in his first outing on his new contract in a tough fight against Chris Jenkins and many more to be announced soon.  We’re looking forward to another massive night in Newcastle.”

Adam Smith, Head of Boxing Development at Sky Sports, said, “We are thrilled to be returning to the North East where there is such a passionate and growing  fan base for Savannah Marshall…..as she aims to successfully defend her WBO Middleweight crown against former World champion Femke Hermans.  Can Sav keep the mega match with arch rival Claressa Shields on track?!  After THE GWOAT’s excellent display and those fireworks ringside in Cardiff  – that unification is HUGE! No doubt Claressa will be back in the UK to see Savannah in April!  Add to that the hugely popular Florian Marku in a real test against Chris Jenkins and we will have a night to remember on Sky Sports in Newcastle!  Excellent to have heavyweight action on the big show – as Britain’s Nathan Gorman tackles America’s Scott Alexander. At just 25 and with 18 of 19 wins – this is a key night for Nathan!”

Kalle Sauerland, Head of Global Boxing at Wasserman, said: “Nathan Gorman is a fantastic addition to what promises to be a stacked card at the Newcastle Utilita Arena on 2nd April. Nathan is without a doubt one the most exciting British Heavyweight talents out there, and at just 25 years of age, he has a massive future ahead of him. Fighting on Sky Sports will provide him with the perfect platform to showcase his skills against a tough opponent like Scott Alexander. Expect fireworks when these two Heavyweights meet in the ring!”