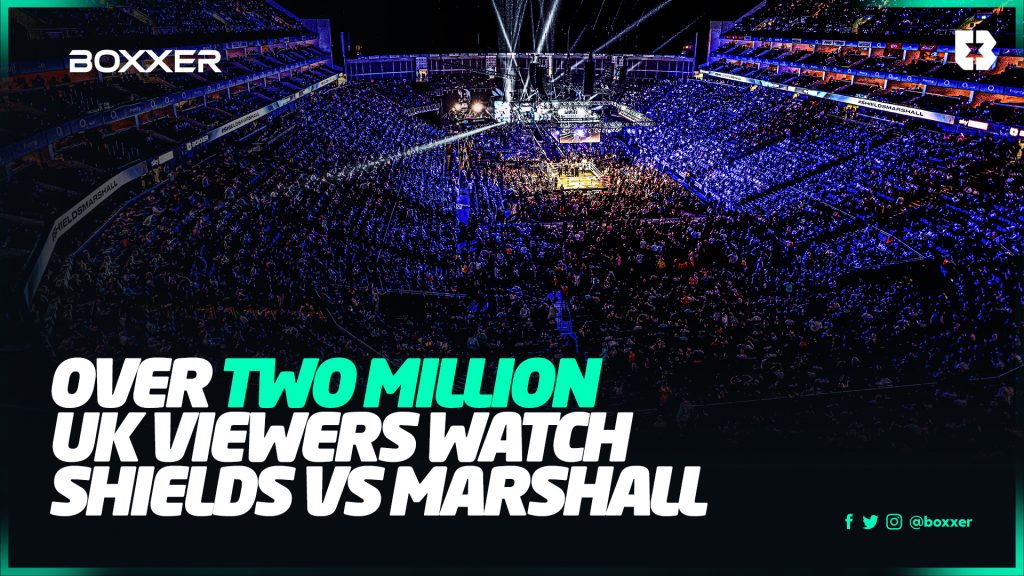 Over two million viewers tuned in overall on Sky to watch a historic BOXXER: Legacy on Saturday, 15th October – with an astonishing peak of 974,000 viewers for the live main event.

That makes the iconic, record-breaking event in London the second highest ever watched professional boxing show since 2014, delivering the biggest audience for a live women’s sport event ever on Sky – along with being screened in 150 countries worldwide, including ESPN+ in the USA.

And for fight fans who want to re-live the epic night of history, BBC are also showcasing the full highlights of Claressa Shields vs Savannah Marshall on their website, having broadcast the Fight of the Year contender live on BBC Radio 5Live to hundreds of thousands of listeners.

The live coverage on Sky Sports, featuring two world title fights and some of the UK’s most exciting young fighters, reached over 2m viewers, with millions more watching the build-up and action across Sky Sports Boxing YouTube and Sky Sports TikTok live streams.

In addition to those watching on TV and online, a sell-out crowd filled The O2, demonstrating the growth in women’s sport. 35% of tickets sold were bought by women, well over the usual amount, and almost 40% of those that watched at home were women – well above the normal average for a fight night on Sky Sports.

American superstar and two-time Olympic Gold medalist Claressa Shields became the first fighter in history to be crowned an undisputed champion in three different occasions as defeated Britain’s Savannah Marshall with a unanimous points victory in front of a sold-out arena at The O2.

Shields was handed the commemorative WBC Elizabethan Belt too, in tribute to the late Her Majesty Elizabeth II after the initial date for the undisputed world middleweight title fight was postponed due to a national period of mourning following the passing of the UK monarch.

And three Team GB Olympic heroes extended their unbeaten professional records in front of 18,000 fans as Lauren Price, Karriss Artingtstall and Caroline Dubois shone in night that will go down in boxing folklore.

BOXXER CEO Ben Shalom said: “It was a historic event that will go down in history. We staged something many thought wasn’t possible.

“Thank you to Sky for their unwavering support for women’s sport and boxing. From a standing start, in just 12 months our partnership has achieved so much already and Saturday night culminated in a record-breaking event.

The next fight on Sky Sports will be headlined by Natasha Jonas world title unification fight with Maire-Eve Dicaire on Saturday, 12th November in Manchester.

The historic event at The O2 was presented in association with official partners bet365, Everlast, WOW HYDRATE, Village Hotels and FCI Markets.