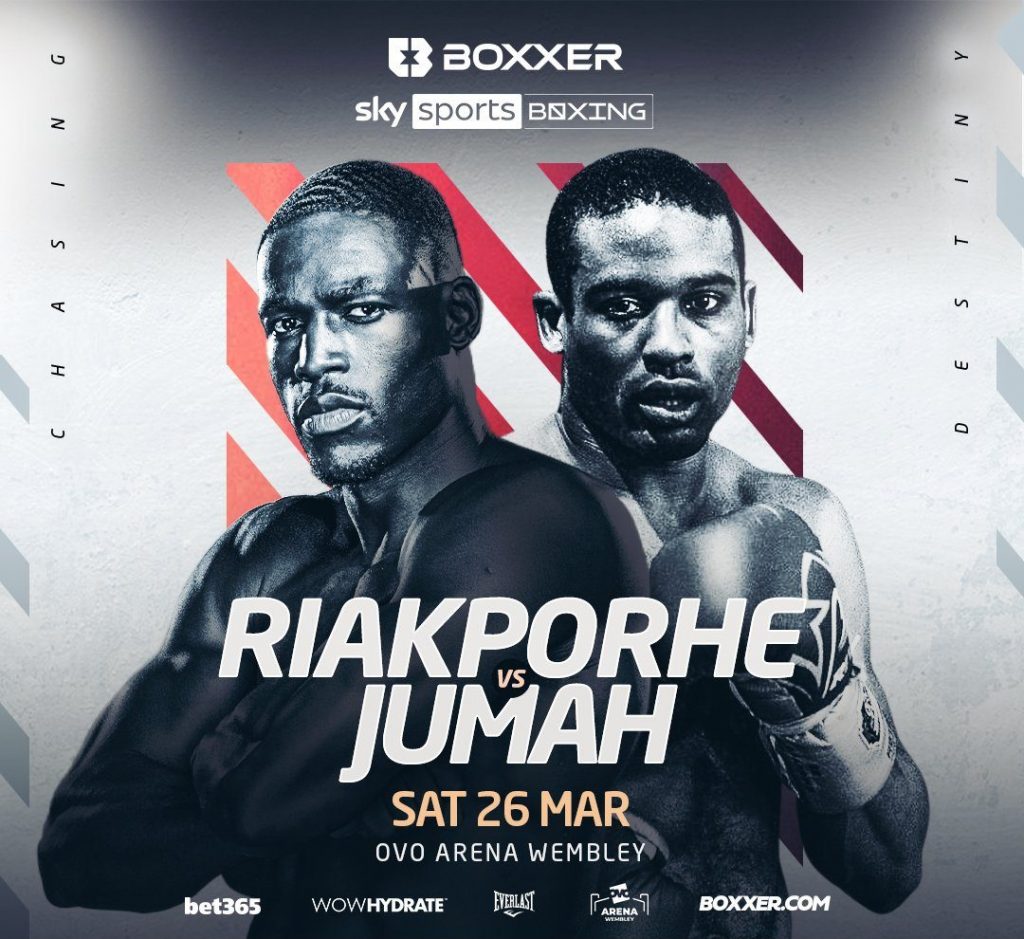 Previously scheduled to face different opponents on the March 26 card, the London cruiserweight rivals are now on collision course following the withdrawal of Fabio Turchi and Mikael Lawal due to injuries sustained in training.

Two undefeated records are on the line in this huge clash of cruiserweights in the capital city. More importantly, Riakporhe is on track for world title contention in 2022 – a win here would be a career breakout for Jumah and open the door to big opportunities.

“The Midnight Train is on a roll and I’m not letting anything stop me in my tracks. I’m pulling into Wembley Arena once again on March 26 and I’m coming with all the smoke. This one is going to be a treat for the fans,” said Riakporhe.

“I’d actually been watching Riakporhe online a couple of weeks ago. We have all the tools needed to pick Richard apart and stop him – and this is what’s happening on the 26th. I’ve seen loads of weaknesses in him and loads of flaws,” said Jumah.

BOXXER Founder and CEO Ben Shalom said, “Richard Riakporhe has shown great progress from fight to fight and he’s on track to secure a world title shot this year. With Turchi pulling out I think it says a lot about his character that he’s willing to take on an unbeaten domestic test like Deion Jumah. It’s a great fight for the fans and it’s a challenge Riakporhe must overcome to achieve his dreams and fulfil his potential.”

Adam Smith, Head of Boxing Development at Sky Sports, said “Richard Riakporhe is really gathering momentum as he climbs the cruiserweight ladder and now his brilliant story takes a twist. With Fabio Turchi out, in steps the undefeated and dangerous British southpaw Deion Jumah for a really intriguing fight night live on Sky Sports on March 26th.”

Also announced for the March 26 card today is British Light-Heavyweight Champion Dan Azeez (15-0, 10 KO’s), who will make his first defence of the belt he won by stopping former champion Hosea Burton in November.

Prior to the headline and chief support bouts, Olympic medallist and Team GB captain Frazer Clarke (1-0, 1 KO) takes the next step of his professional journey and looks to pick up his second win when he faces Spanish power-puncher Gabriel Enguema (10-12, 6 KO’s).

Clarke’s fellow Olympian Caroline Dubois (1-0) will join him at Wembley for her second professional contest, having successfully entered the pro ranks with an emphatic win in Cardiff last month.  Younger sister of Daniel Dubois, Caroline won numerous plaudits as a 37-3 amateur and has the potential to become one of the faces of the women’s sport worldwide.

Former WBO Global Welterweight Champion Chris ‘2 Slick’ Kongo (12-1, 7 KO’s) aims to get back into world title contention this year and signed a multi-fight promotional deal with BOXXER earlier this year in pursuit of that aim.

Trained by renowned coach Ben Davison, who counts Undisputed World Super-Lightweight Champion Josh Taylor among his stable, Kongo will be kicking off his world title campaign on this card.

Ben Davison will also be in the corner of London heavyweight Jeamie TKV as he makes his professional debut against Luke Batstone. TKV’s highly-decorated amateur career included tenure as the Southern Area Heavyweight Champion and English Heavyweight Champion plus a silver medal at the 2019 African Games.

Southampton’s Joe Pigford (18-0, 17 KO’s) – owner of some of the heaviest hands in British boxing – seeks to add yet another stoppage win to his unbelievable record when he faces Argentina’s Guido Pitto (27-9, 8 KO’s). Pigford presently has 94% of his victories by way of KO or TKO.

The 18-year-old Team England amateur standout Jimmy Lee – winner of eight national titles and a European gold medal – makes his professional debut in a lightweight contest against Luke Merrifield after ending his amateur career with a 94% win ratio (47-3).

Opening the card will be Anthony Joshua’s female prospect Shannon Ryan. Joshua signed the super-flyweight to his 258 MGMT agency recently and intends to guide her to world champion status in the coming years.