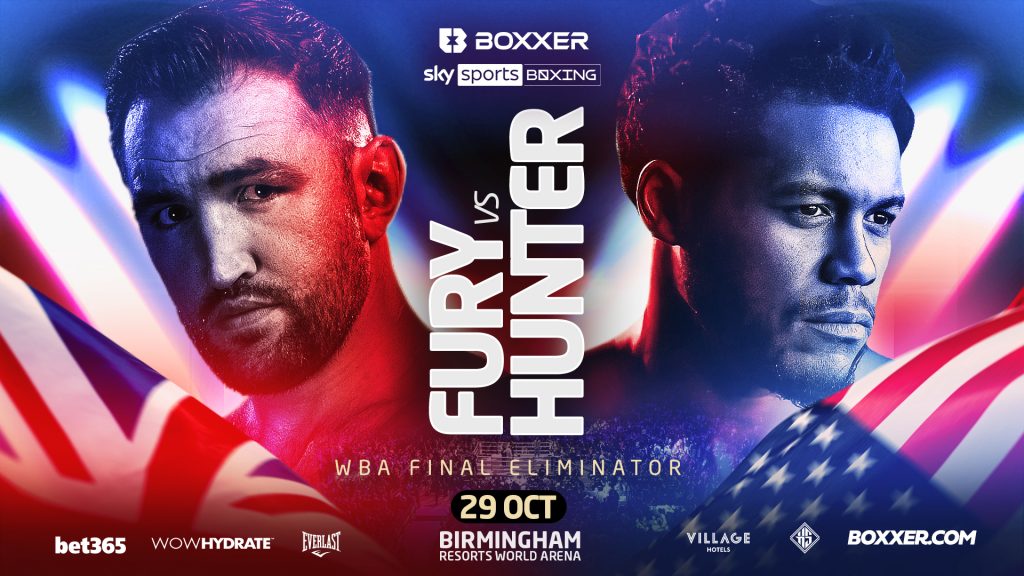 The two are set to face off at the Resorts World Arena in Birmingham, England on Saturday, October 29th with the winner emerging as the next contender to challenge for the WBA heavyweight title held by Daniel Dubois.

Fury (26-3-0, 15 KO’s), ranked at #4 in the WBA, has been gunning for a second shot at heavyweight gold ever since his September 2017 challenge for the WBO World Title ended in a points defeat by Joseph Parker.

Now aged 27, Fury – managed by Mick Hennessy – has steadily honed his skills in the interim and is now ready to take his second run at world title contention. In October last year, his most recent outing, he was on blistering form as he forced the rugged Christian Hammer to retire on his stool after just five rounds.

Hammer has taken the likes of Alexander Povetkin and Luis Ortiz the distance; his loss to Hughie Fury was the first time he had been stopped in the ring since 2015 – that defeat came at the hands of Hughie’s cousin Tyson Fury.

Now Fury is taking on a very tough test in the form of Michael Hunter, who has a reputation as one of the most avoided fighters in the division, who has not yet reached his potential.

“I take the fights everyone avoids,” said Fury. “Michael Hunter has fought the best and is up there with the best. These are the fights I want, to show who is the best fighter out there. I’m looking forward to this challenge. I believe I’m one of the best fighters in the world and this is another big fight to prove I stand with the top three in the world heavyweight division.”

WBA #2 ranked Hunter (20-1-2, 14 KO’s) has been swerved by many of the big names in the division and is targeting his first world heavyweight title shot after a points loss to Oleksandr Usyk in 2017 for the WBO World Cruiserweight title.

Boxing is the family business – Michael’s father Mike had his name in the heavyweight contender conversation during the 1980s and 90s, facing some of the big names of the era including Buster Mathis Jr., Tyrell Biggs and Frans Botha.

The younger Hunter represented America in the London 2012 Olympics and turned pro shortly afterwards, starting out in the cruiserweight ranks and quickly putting together an undefeated run before running into Oleksandr Usyk in 2017 and suffering his first defeat.

Currently riding a seven-fight win streak, Hunter caused a huge upset on his last visit to the UK, stopping the unbeaten Martin Bakole in the 10th round of a thrilling fight, the referee being forced to intervene when Bakole was defenceless under a flurry of heavy blows .

Ben Shalom, BOXXER Founder and CEO, said: “We’re excited to make our first visit to Birmingham for a fight which has everything on the line. Hughie Fury has patiently built his way back to world title contention and has overcome big obstacles along the way. This is another huge test for him against one of the most avoided fighters in the division.

“Hughie is about to enter his prime. If he can get past Hunter, he puts himself in the mix for world titles in the coming months and years. Michael will also believe this is the chance he is waiting for, and with such a massive opportunity on the line for the winner, both fighters will be giving it their all. It promises to be an epic battle.”

Adam Smith, Sky Sports Head of Boxing Development Adam Smith, said: “This is a superb match up in boxing’s flagship weight class and will be worth the wait. It’s a serious test for Hughie Fury against the excellent Michael Hunter and will require absolute peak performance from him. A win here will set the stage for Hughie to step up and take his place on the world stage among the best of the best. He’s heading to Birmingham ready to take his destiny in his hands.”

Please note: Fury vs Hunter is moving to October 29th at Resorts World Arena in Birmingham. For any fans who purchased tickets for this fight, originally stated for July 2nd, your ticket for the AO Arena will still be valid for our big, upcoming BOXXER show in Manchester – with a headliner announced very shortly. Refunds are available, if preferred.