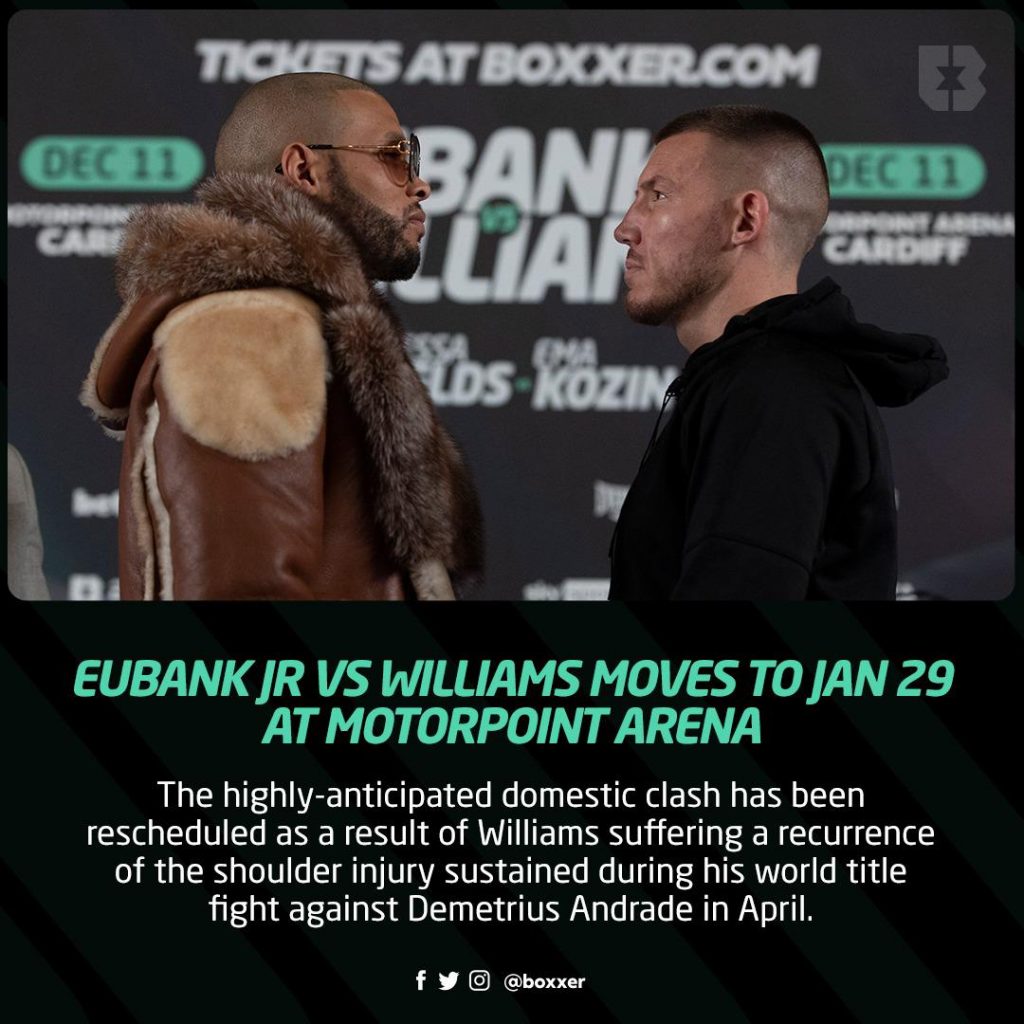 Cardiff, Wales – (Friday, November 26) – The highly-anticipated domestic clash between Chris Eubank Jr and Liam Williams has been rescheduled to Saturday 29th January at the Motorpoint Arena Cardiff, kicking off a huge year of live boxing on Sky Sports.

Originally scheduled for December 11, the bout – presented by BOXXER and Sky Sports Boxing, in association with Wasserman Boxing – moves to the new year as a result of Williams suffering a recurrence of the shoulder injury sustained during his world title fight against Demetrius Andrade in April.

Following a series of scans and consultations with medical experts, Williams has been advised that the flare-up can be treated without surgery and that the bout can take place at the end of January.

Tensions between the two rivals were already running high, following years of heated invective around their mutual claim to being the #1 middleweight in the UK. The added build-up time is expected to take those tensions to new heights and set the stage for an explosive showdown in the Welsh capital.

“We were absolutely gutted to hear of Liam’s injury and so we are equally delighted to get this fight back on, in a matter of weeks, to ensure Liam’s 100% fitness. The bitterness and mind-games towards each other has only intensified during this period, and by the time they get into the ring it will be at boiling point. I’m glad the fans will get the chance to see the fight that they desperately wanted,”

“We’ve got to wait a few more weeks for Chris Eubank Jr vs Liam Williams, an unexpected twist in a heated rivalry which has just become even more intense. There was real tension as Eubank and Williams filmed ‘The Gloves Are Off’ in Sky Studios recently, so you can expect a classic British battle when they finally share the ring,” said Adam Smith, Head of Boxing Development at Sky Sports.

“We’re planning a blockbuster schedule which will be stronger than ever at the start of 2022, with Josh Taylor also defending his undisputed world titles in February – and there are more exciting announcements to come very soon!”

Kalle Sauerland, Head of Global Boxing at Wasserman remarked, “We were obviously disappointed to hear of Liam Williams’ injury but thankfully we will only have to wait a few more weeks to witness this blockbuster clash. Chris Eubank Jr vs. Liam Williams is the biggest fight in British boxing right now.

” There is genuine bad blood between them, and their rivalry is only going to intensify as we get closer to fight night. This is the match up everyone has been waiting to see. The atmosphere in Cardiff is going to be incredible when these two warriors finally meet in the centre of the ring to settle their differences.”

*Tickets purchased that have the original fight date of 11 December 2021 will be still be valid for the rescheduled date of 29 January 2022. For a full refund please go to your original point of purchase.*