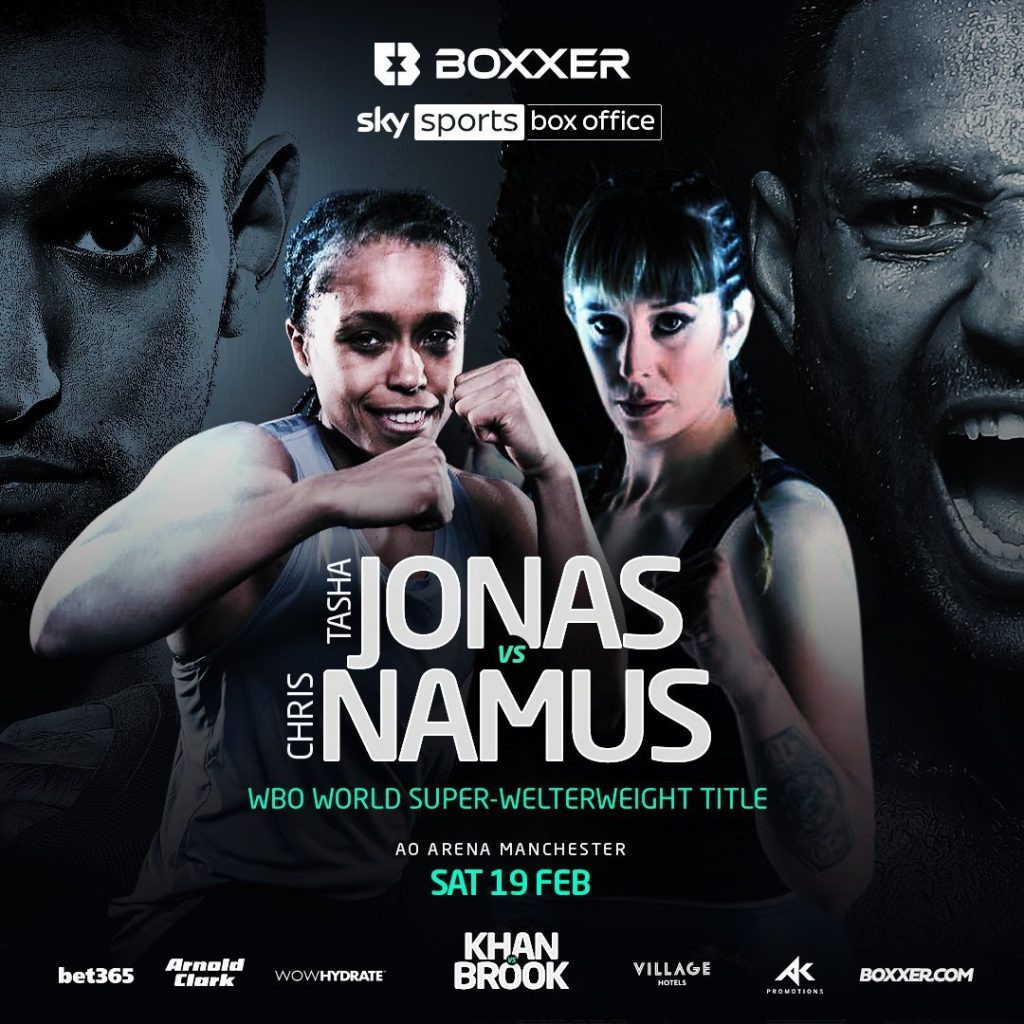 CHANGE FOR JONAS AS SHE NOW FIGHTS NAMUS FOR WORLD TITLE

Jonas (10-2-1, 7 KO’s) was all set to fight Ewa Piatkowska for the crown, but the Polish fighter contracted Covid and was forced to withdraw and instead ‘Miss GB’ must now face the experienced Uruguayan Namus (25-6-0, 1 NC, 8 KO’s) in her third shot at World title glory.

Namus has been a professional since 2007 and won the IBF World Female title in October 2017 in the highlight of a 32-fight career. She holds the edge over Jonas in experience with over double the amount of fights and treble the amount of rounds than her rival.

Jonas is the first ever female boxer to compete for Team GB and Britain’s first female boxer at the London 2012 Olympics.  Her ferocious style of fighting as an amateur made her a big favourite with fans and that has transferred to the pros.

“Nothings changed for me,” Said Jonas.  “She’s still a tall and rangy opponent and probably more attack minded than Piatkowska from what I’ve seen. They’re very similar in stature and how they box, but it’s all about me and what I do.”

She added, “It’s a disadvantage to me that she’s a natural middleweight, but it’s an advantage for me that she’s had short notice for the fight. This fight is all about me executing my game plan more than me worrying about hers.”

Jonas vs. Namus features as chief support to one of the most highly anticipated showdowns in British boxing history between bitter rivals Khan and Brook.

The undercard is lined up with some intriguing encounters including a North v South clash between Manchester’s Charlie Schofield (17-1-0, 1 KO), who makes the first defence of his English Super-Middleweight Championship against Londoner Germaine ‘G-Man’ Brown (11-0-0, 3 KO’s). Schofield claimed the belt last June with a victory over Mickey Ellison, but Brown is looking to cause an upset in Schofield’s backyard.

Manchester favourite Brad Rea (11-0-0, 4 KO’s), who was in an incredible battle with Jez Smith last October in a 2021 Fight Of The Year Contender, returns to the ring for an eight-round contest against undefeated Irish southpaw Craig McCarthy (8-0-1, 2 KO’s) in what is a real 50-50 fight.  Both will come head-on and a firefight between the pair could be on the cards.

Olympic heavyweight hero Frazer Clarke, who captained Team GB at the 2020 Olympic Games and won a Bronze medal for Great Britain, will make his highly anticipated professional debut. Burton-on-Trent’s Clarke will by-pass the traditional four-round entry and go straight into a six-rounder.

Unbeaten cruiserweight prospect Viddal Riley (4-0-0, 2 KO’s) will face the experienced and dangerous Namibian Willbeforce ‘Black Mamba’ Shihepo (25-13-0, 18 KO’s) on his BOXXER and British debut. In just his fifth fight, Riley takes a step up against Shihepo who has 38 fights under his belt with 25 wins and 18 of those have come by KO.

In September 2016 Shihepo went nine rounds with Callum Johnson, who was 16-0 at the time, until he was stopped in the ninth round. He also extended former World Champion Arthur Abraham the full twelve rounds distance in August 2013.

Brothers Adam and Hassan Azim, two of the sport’s hottest talents, kick off their year featuring on the undercard of their idol Amir Khan. They started boxing after watching Khan’s fights and, being also of Pakistani heritage, are keen to carry the torch he lit.

Lightweight Adam (2-0-0, 1 KO), who blew away Stu Greener at Wembley last November inside two rounds, will take on Seaham’s Jordan Ellison – who won the Northern Area Super-Lightweight title in his second from last fight – over six rounds.

While welterweight Hassan (1-0-0, 1 KO), who made an explosive pro-debut last November with a first round KO of Ivan Njegac on the same card as Adam, will face veteran MJ Hall from Liverpool over four rounds.

Also keeping the show in the family will be Amir Khan’s exciting and big-hitting cousin Abdul Khan (2-0-0) who has his third pro fight in a four-round featherweight contest against Liverpool’s Ricky Starkey.

Finally unbeaten Keighley super-bantamweight prospect Ibrahim Nadim (5-0-0) looks to maintain his record when he takes on Oldham’s Taka Bembere in a four round contest.