The weekend in words

The draw for the unique Boxxer four-man tournament will be made later this week.

It will provide three of the seven fights on the Nov 10 show – two semi-finals of three rounds and a final of five rounds. That’s fast.

And like all multi-fight formats the form book can be ripped up – the best boxer, the boxer with the best record and the best team rarely wins.The winners are the toughest, the bravest, the smartest and men that have either lost or come close to losing. The Boxxer tournament is no place for boxing’s protected pretty boys.

Zak Chelli might just be the closest thing to a boxing pretty boy on the night – Chelli can bang, has lost just once in nine fights. He starts as the slight favourite.
Ben Ridings is unbeaten, he has made his name sparring behind closed doors and he has a mission or two. He also needs the money – honesty is always welcome in the boxing business.

Charlie Schofield is probably the nice guy of the quartet, has lost just once in 16 fights. He has that calm way about him – he is not making bold claims, just promising a display.

And then there is the hard man Diego Costa. He is the senior man in the quartet, a veteran of a thousand sparring rounds with great boxers and unbeaten in seven fights. He has no fear.

Four men, three fights and one winner – there will not be a bad round. 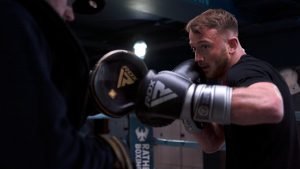