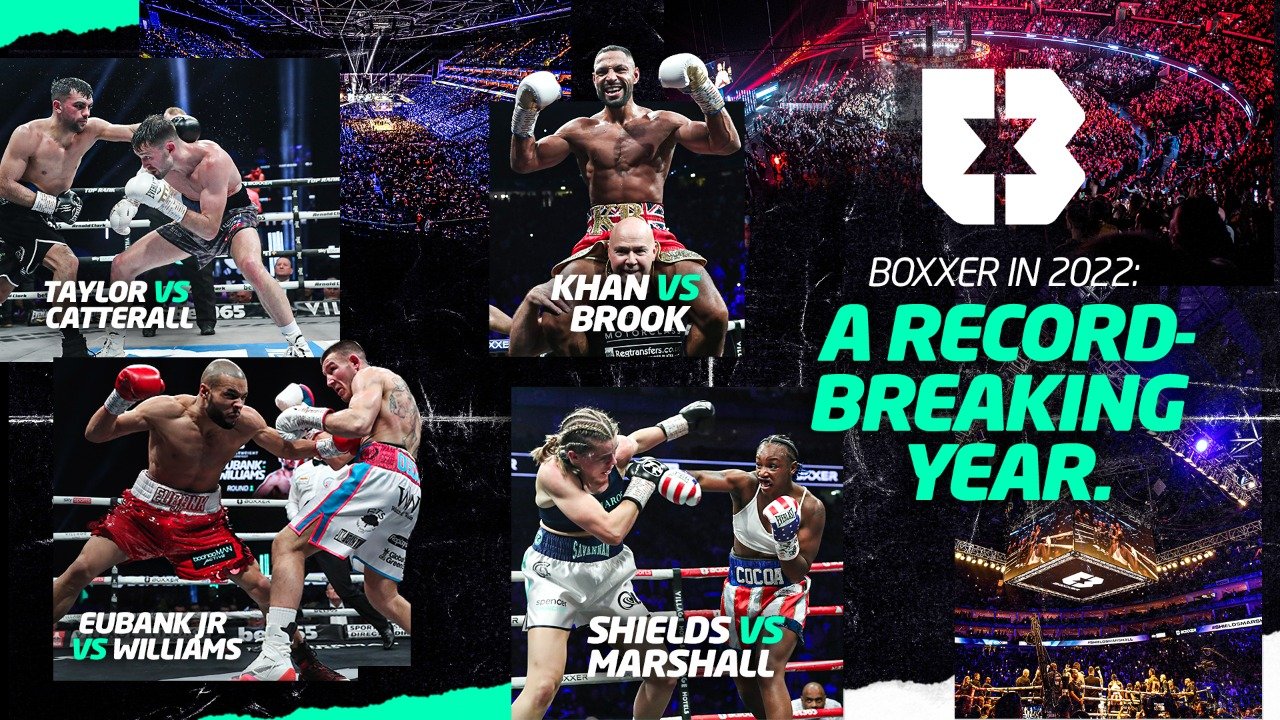 BOXXER IN 2022: A RECORD-BREAKING AND BREAKTHROUGH YEAR – INCLUDING UNPRECEDENTED EVENTS AND VIEWING FIGURES, INNOVATION, MARQUEE SIGNINGS AND A HISTORIC ALL-FEMALE EVENT WATCHED BY MILLIONS WORLDWIDE

As 2022 draws to a memorable close, BOXXER is celebrating a phenomenal year of innovation, growth and record-breaking success for its rising stable of boxing superstars. Here, we look back at a remarkable 12 months for the next-generation promotion:

In its first full year with Sky, BOXXER began 2022 with a bang in Cardiff. In a hugely-anticipated grudge match between Chris Eubank Jr and Liam Williams at the Motorpoint Arena on 5th February, Eubank Jr scored four knockdowns on his way to a unanimous points decision in front of a raucous crowd. Significantly, the event drew over 1 million viewers in the UK & Ireland – outperforming a decade-old feat as it delivered an in-home viewing record on Sky. Also that month, the undisputed world title fight between Josh Taylor and Jack Catterall, at a sold-out OVO Hydro in Glasgow – which ended in a controversial points win for Taylor – drew almost 1 million live viewers on the night in the UK.

In October, the first-ever all female event in the UK was held at The O2 in front of a sold-out crowd in London – just weeks after it was postponed in September due to the passing of the late Her Majesty Queen Elizabeth II. Claressa Shields and Savannah Marshall became the first female fighters to headline at the iconic venue in the capital, with the American victorious on points as she was crowned the undisputed world champion – along with the honorary WBC Elizabethan Belt – in what was the most-anticipated women’s fight of all-time with many in the sport hailing it as the event of the year.

The chief support was another electrifying clash as Alycia Baumgardner defeated Mikaela Mayer for the unified world championship with the pair’s bitter rivalry ranked as one of the best of the year.

The landmark event drew over 2 million viewers in the UK & Ireland on the night, becoming the most-watched female boxing event in history, and Sky’s most-watched live women’s sport event ever. The attendance was incredibly impressive too: 20,000 fans packed out a sold-out O2 with 35% of ticket-holders being female – far higher than the median of 8% for a typical Boxing show.

The groundbreaking event showcased BOXXER’s forward thinking for the sport and its willingness to put promotional politics to one side to stage the best fights as it partnered with other leading promoters.

LEADING THE WAY IN THE UK

It has been a year of unparalleled growth, with an ever-growing roster of world champions, Olympians and elite fighters – and BOXXER delivered more UK shows than any other promoter. This saw Ben Shalom’s promotion travel the length and breadth of the country, selling out arenas in London, Manchester, Glasgow, Cardiff, Liverpool, Newcastle, Coventry and Bournemouth – including blockbuster pay-per-views, world championship fight nights and unique BOXXER Series tournaments.

Amir Khan and Kell Brook’s decade-long rivalry was finally settled in Manchester, in BOXXER’s first pay-per-view show on Sky Sports Box Office, since signing a four-year deal with the broadcaster in June 2021. The Khan v Brook campaign and event gripped the nation, exceeding half a million pay-per-view buys and becoming the most-watched non-heavyweight pay-per-view since Carl Froch rematched George Groves in 2014. Tickets for the event sold out in just 10 minutes, making it one of the fastest-selling events not only in British boxing history but in British sporting history as a whole.

In November, the announcement of Chris Eubank Jr vs Liam Smith saw fans flocking to ticket websites to purchase their seats for January’s upcoming pay-per-view event – and now only a small handful of tickets remain for the eagerly-anticipated fight on January 21st.

Natasha Jonas was celebrated by many in Boxing as the Fighter of the Year – and deservedly so. Miss Team GB started the year in style as she landed the WBO world title from Chris Namus in February. Then the Merseyside fighter – ranked in the top 10 of the pound-for-pound rankings – capped an incredible 12 months when she captured the IBF and Ring Magazine world titles with her dominating points victory over Canada’s Marie-Eve Dicaire in November at Manchester’s AO Arena, just two months after she defeated Patricia Berghult for the WBC in her home city of Liverpool. And 2022 marked a memorable time for the likes of ‘Super’ Dan Azeez, who added the Commonwealth crown to his British title when he closed the year with a brilliant stoppage win in Bournemouth over Rocky Fielding.

STARS OF THE FUTURE

Adam Azim put pen to paper on a new multi-year deal with BOXXER back in October. The lightweight, who turns 21 next July, announced himself in magnificent fashion in 2022 with many spectators heralding him as a future world champion. Fellow stablemate Caroline Dubois has also been earmarked as one of the bright superstars to watch in 2023 after her phenomenal, undefeated debut year.

BOXXER launched the year by adding the likes of Azim and Dubois to its stable – along with one of the sport’s rising superstars and another to watch in 2023: Ben Whittaker. The Tokyo 2020 Olympics silver medallist staged a breathtaking knockout performance on his summer debut in Bournemouth, before successfully winning in Saudi Arabia on the Anthony Joshua vs Oleksandr Usyk undercard. Whittaker wasn’t the only Team GB hero who joined forces with BOXXER in 2022. Olympic bronze medal victor Frazer ‘Big Clarke’ Clarke has bulldozed his way through the heavyweight division with a series of destructive wins. Fellow 2020 bronze medallist Karriss Artingstall has impressed with two wins from as many fights, including a brilliant win on the Shields-Marshall undercard – along with Tokyo gold medallist Lauren Price, who has enjoyed a similar record and ended the year collecting a coveted MBE award.

Along with the Olympians, BOXXER added to its burgeoning roster with the impressive signings of Jack Catterall, Savannah Marshall, Tasha Jonas, Florian Marku, Chris Billam-Smith,Liam Smith and Joseph Parker. Former WBO world heavyweight champion Parker made his debut in September, just weeks after Smith successfully announced himself on the BOXXER stable with a victory in his hometown of Liverpool. His box office fight with Joe Joyce in Manchester is widely regarded as one of the finest fights of 2022 – and the Kiwi returns to the AO Arena on January 21st, where he will take on Jack Massey.

BOXXER broke the mould as it staged its first-ever ‘Super Sunday’ event at London’s famous Alexandra Palace in November – introducing the sport to a fresh, young audience who revelled in an innovative ‘Fan Zone’ offering which saw legends like Spencer Oliver and Antony Crolla invite fans into the ring for bespoke pad training, along with a number of exciting experiences including t-shirt cannons, VIP appearances and VR gaming moments before savouring an unforgettable afternoon of Boxing, in which Adam Azim celebrated a stunning knockout victory in the main event over Rylan Charlton. In a first for BOXXER, it also recorded the historic Shields-Marshall main event in October in an immersive VR 360-degree camera experience, providing an unrivalled virtual viewing content to engage fans like none other before.

Surpassing records domestically, BOXXER has also broken new ground in its international growth and footprint, with events such as Shields v Marshall being broadcast across every continent and in over 150 territories globally. This includes airtime on some of the world’s most established and tier-one broadcast platforms, including ESPN+ in the US, Fox Sports Australia, and MBC Group in MENA.

BOXXER Founder and CEO Ben Shalom said: “It has been a phenomenal, record breaking year for BOXXER. We feel we’ve made an impact on the sport in a short space of time and we’re very thankful to all our partners for helping us do that.

“From a standing start, we shattered Sky’s decade-long UK audience for Boxing in February before Khan vs Brook broke Sky’s Box Office record for a non-heavyweight main event. Other standout highlights including the first male undisputed fight for all the belts in the UK and then staging the most watched women’s sporting event on Sky, for the first-ever all female card in the UK, in front of a sold out O2 was truly incredible. Globally, our events have been broadcast in over 150 countries.

“Our roster is shaping up to be one of the most exciting on the planet with world champions and rising superstars who will undoubtedly go on to reach the pinnacle of the sport. Out of the ring we are growing an incredible team too, as we continue to push to break down promotional barriers in order to improve and innovate Boxing for the better.

Indeed, 2023 promises to shatter more records as BOXXER kicks off the new year with one of the biggest fights on the calendar as Chris Eubank Jr and Liam Smith collide at Manchester’s AO Arena on January 21st, live and exclusively in the UK & Ireland on Sky Sports Box Office.

Further shows will be announced in due course – with an exciting news announcement to follow early next week.

Scroll back to top
We use cookies to ensure that we give you the best experience on our website. If you continue to use this site we will assume that you are happy with it.OkPrivacy policy