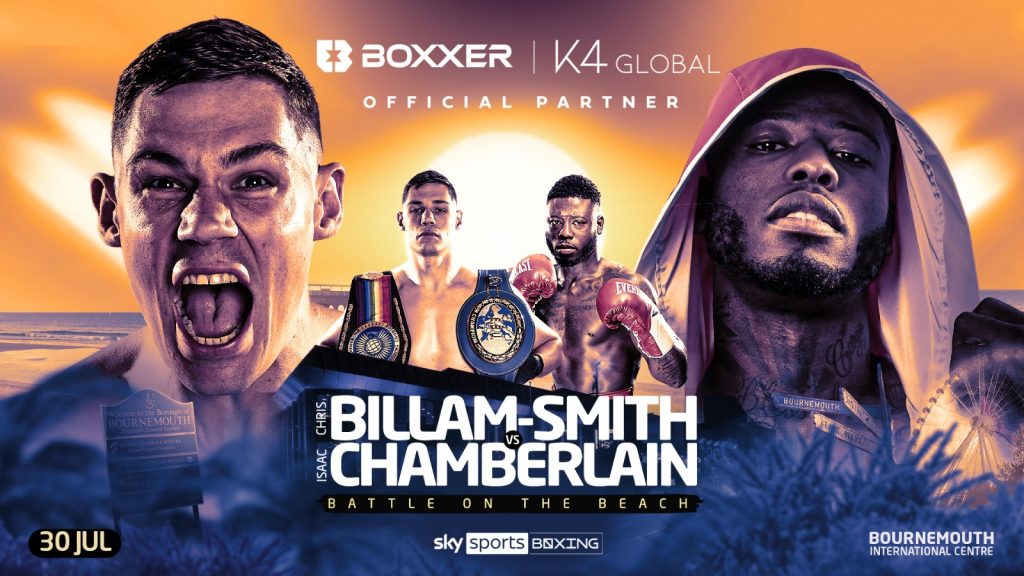 London, England – (July 4, 2022) – BOXXER, the exclusive boxing promoter on Sky Sports in the UK & Ireland, is pleased to announce a new partnership with K4 Global, ahead of a stacked card on July 30 in Bournemouth, headlined by Chris Billam Smith v Isaac Chamberlain.

K4 Global is a UK-based investment company with a proven track record of establishing and developing businesses across a range of sectors, including technology, media and property. Founded by entrepreneur Joseph Ashford-Ellis, the company strives to identify unique investment opportunities, drive continued growth, improve margin and reduce risk of numerous global businesses.

BOXXER’s event on July 30, coined “Battle On The Beach”, will take place at the Bournemouth International Centre and be shown LIVE and exclusively on Sky Sports in the UK&I. Topping the bill is a 50-50 clash that pits two of the top-ranked British cruiserweight fighters against each other in Billam-Smith (who hails from the South Coast) and Chamberlain, both of whom are on a run of excellent form and carry knockout power – with the winner of the contest firmly within shot of a world title.

Also on the card will be the much-anticipated professional debut of Olympic silver medallist and amateur standout, Ben Whittaker, who is trained by SugarHill Steward and widely touted to be a future star of the sport. Fellow Olympians Frazer Clarke and Caroline Dubois, and Southampton-based knockout-artist Joe Pigford, will bolster an action-packed night of boxing.

Under the new partnership, K4 Global branding will be integrated into all pre-promotional activity related to the event, including the fight week open workout, press conference, and weigh-in – which are set to take place at several iconic locations in the seaside town.

On fight night, K4 Global will then feature across the ring toblerones, arena screens and press boards; along with brand mentions by the MC during the live broadcast.

BOXXER’s founder and CEO Ben Shalom said: “It’s great to be partnering with K4 Global on this huge domestic bill. I’ve known Joe for some time and he played an instrumental role in us coming to Bournemouth with Sky Sports. We’re looking forward both to working closely with K4 on this event, and to collaboratively bringing tier-one professional boxing to the South Coast.”

Joseph-Ashford Ellis, owner and founder of K4 Global, said: “We are delighted that we have agreed this landmark event to take place in Bournemouth, I am passionate about the sport and this is fantastic news for the town in terms of the event itself and the opportunities it will bring.”

To find out more about K4 Global and their business portfolio, visit k4 global.co.uk.