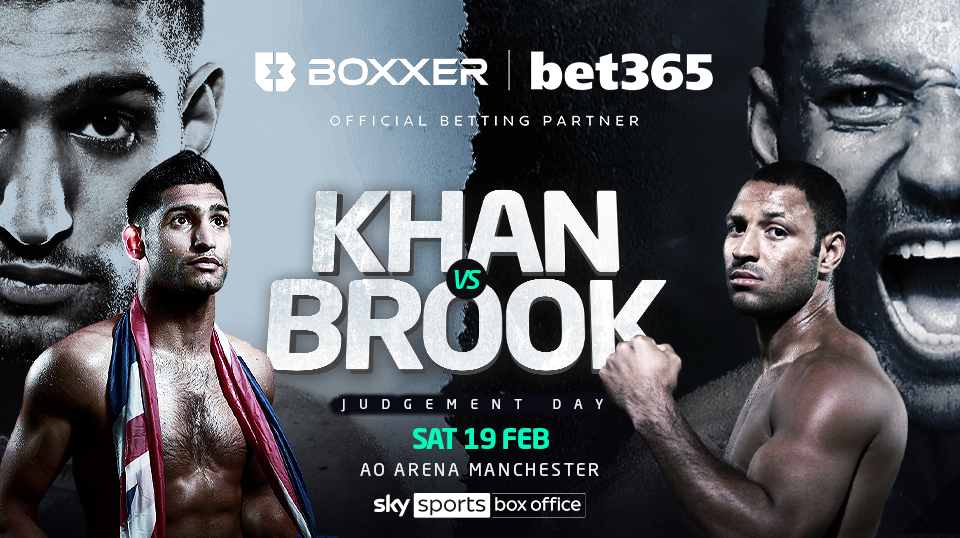 BOXXER is delighted to announce bet365 as the Official Betting Partner of Amir Khan vs. Kell Brook on February 19th 2022, airing LIVE and exclusively on Sky Sports Box Office in the UK & Ireland.

Khan and Brook will face off in a blockbuster pay-per-view event that has been years in the making, in one of the most highly anticipated match-ups in world boxing. The iconic AO Arena in Manchester will play host to the most significant all-British clash in recent history and the biggest fight of the year, as two stars of the sport and former world champions go head-to-head on the greatest stage. A stacked undercard to support the 50/50 main event – tickets for which sold out in a matter of minutes – is set to be announced soon.

Since the company’s inception in 2000 by Denise Coates CBE, bet365 has become a global operation offering an unparalleled online betting experience to more than 63 million customers in more than 20 languages.

bet365 is renowned for its innovation of award-winning and industry-leading betting products, having pioneered In-Play betting as it continues to break new ground in software innovation. This includes live streaming of 600,000 events per year on its digital platforms and is complemented by its offerings in Casino, Poker, Games, and Bingo.

As part of the partnership, bet365 branding will appear prominently across all pre-promotional activity, including press conferences, open workouts and weigh-ins; culminating in extensive in-arena exposure on February 19th, with 360-degree branding across the ring corners, ropes and toblerones; and the venue’s screens, banners and boards.

As BOXXER’s Official Betting Partner, bet365’s odds will be promoted on BOXXER’s platforms in the build-up to fight night, with in-play optimisations exclusive to BOXXER. bet365 will feature across BOXXER’s social content, including logo integration into digital content series, association with BOXXER’s performance prizes and exclusive content capture with talent.

Commenting on the partnership, BOXXER’s founder and CEO Ben Shalom said: “We’ve been working with bet365 since our launch with Sky Sports in October, and we’re delighted to be taking our partnership to the biggest event in British boxing. They are leaders in their space and we’re looking forward to an iconic night together.”

A spokesperson at bet365 said: “What a start to 2022 for bet365 and BOXXER! First we have Eubank Jr vs. Williams in Cardiff on January 29th and then comes Judgement Day on February 19th. We are thrilled that the extension to our current partnership with BOXXER will launch with the most anticipated grudge match in recent boxing history, Amir Khan vs. Kell Brook. The eyes of the boxing world will be fixed upon Manchester and we’re delighted that the bet365 brand will sit proudly beside our partners at BOXXER.”

Download the bet365 app here, for the latest odds on BOXXER’s events