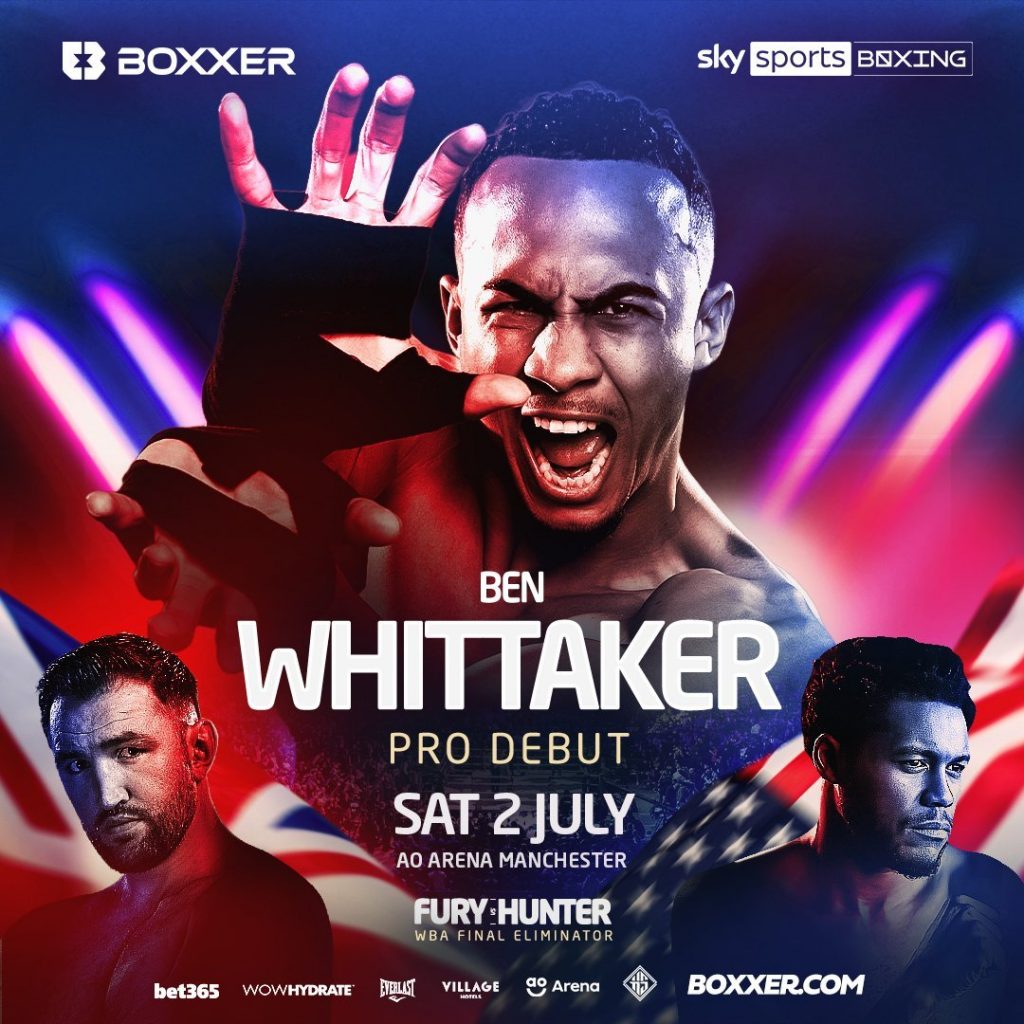 London, England – (1 June 2022) – British boxing’s newest star Ben Whittaker will launch his professional career on the big stage when he features on the undercard of the Hughie Fury-Michael Hunter WBA World Heavyweight Title Eliminator on Saturday 2nd July at the AO Arena Manchester, live and exclusively on Sky Sports.

Whittaker is the final member of the record-breaking Team GB Tokyo medallists to turn over from the amateur ranks and is one of the biggest and most exciting names in recent years to enter the pros.

Recognized internationally as a top prospect, ‘B£NZO’ made headlines around the world last month when he inked an exclusive long-term promotional agreement with BOXXER at a lavish promotional launch packed with media and VIP attendees.

Charismatic and talented, Whittaker has stated an aim to become a global star and one of Britain’s all-time greats as he prepares to make his professional debut in the dynamic and competitive light-heavyweight division.

Guiding the 24-year-old Wolverhampton native on his professional path will be trainer SugarHill Steward, trainer of heavyweight megastar Tyson Fury. He has compared Whittaker to the legendary Roy Jones Jr, noting that both turned professional after achieving Olympic glory.

“Everything that’s happened so far has led me to this and I have been waiting my whole life for this moment. I am just so excited to get in the ring and show you all what you already know I can do, I am counting down the days,” said Whittaker.

BOXXER Founder and CEO Ben Shalom said, “I’m very excited ahead of the professional debut of Ben Whittaker and believe that we’re going to witness the start of a very special journey in his career on July 2nd. We’ve never seen so much interest in a fighter announcement.

Adam Smith, Sky Sports Head of Boxing Development Adam Smith, said, “A brilliant main event is supported by the highly anticipated professional beginning for Olympian starlet Ben Whittaker. This is a huge moment for Sky, Boxxer, 258, his trainer SugarHill and Ben’s family. We think he’s got the mix of skill, strength and personality to become a massive star in the sport. With a stacked card featuring our other emerging talent, this should be a real summer sizzler on Sky Sports!”

A ticket for the BOXXER event will grant access to AO Manchester Arena from 17:30 for the duration of the evening. Tickets will subsequently grant free access to the Hatton v Barrera show by Europa Concerts which will begin after BOXXER’s event has concluded.