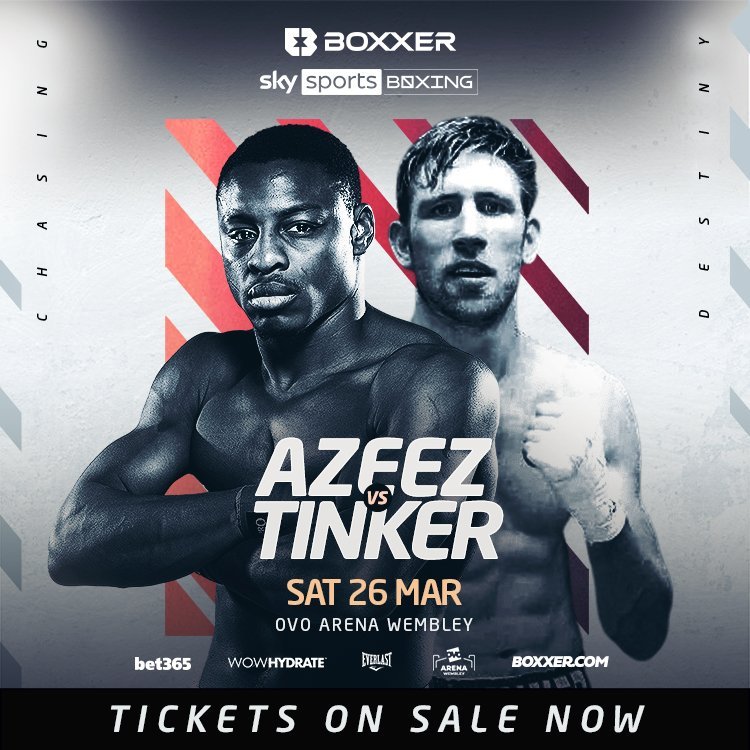 AZEEZ OUT FOR REVENGE AGAINST TINKER AT WEMBLEY ARENA

London, England –  18 March 2022 – Dan Azeez will get his chance for revenge against  rival Matthew Tinker who handed him a ‘pasting’ in the amateurs when they meet again  in the pro ranks on Saturday 26th March at the OVO Arena Wembley, live on Sky Sports.

Azeez and Tinker face off in a clash of the undefeated big-hitters in their 10-Round International Light-Heavyweight showdown that features as chief support to the big London cruiserweight derby between Richard Riakporhe and Deion Jumah.

In his own words, Azeez admits he was well beaten by Tinker in their three-round fight in November 2014 for the Lord Mayor BoxCup, but now over six years on he believes it will be a completely different fight in the pros when they once again trade leather with both unbeaten records on the line.

Lewisham’s undefeated Azeez has looked sensational on his rise to a perfect 15-fight and 10 KO record and has won the Southern Area, English and British titles through the traditional route.

He made a massive statement in his last fight when he challenged for the Lonsdale belt against the former British Champion Hosea Burton last November with a punch perfect performance to halt the tough Carrington man in the seventh round.

From Scarborough, Tinker has built his unbeaten eight-fight record exclusively in the US since turning professional in November 2019.  A highly regarded amateur who won the 2014 Haringey Gold Elite, hard southpaw Tinker has proved his power Stateside with six of his eight wins coming by stoppage and six of those inside two rounds.

Azeez is relishing the rematch and promises a more defining outcome.  He said, “Tinker is my old amateur rival and he beat me so it would be great to get one back over him in the professional ranks.  He’s a good fighter with a great amateur pedigree and I believe our styles will make for a great fight.  We’re now meeting in the pros and it will be a totally different ending.”