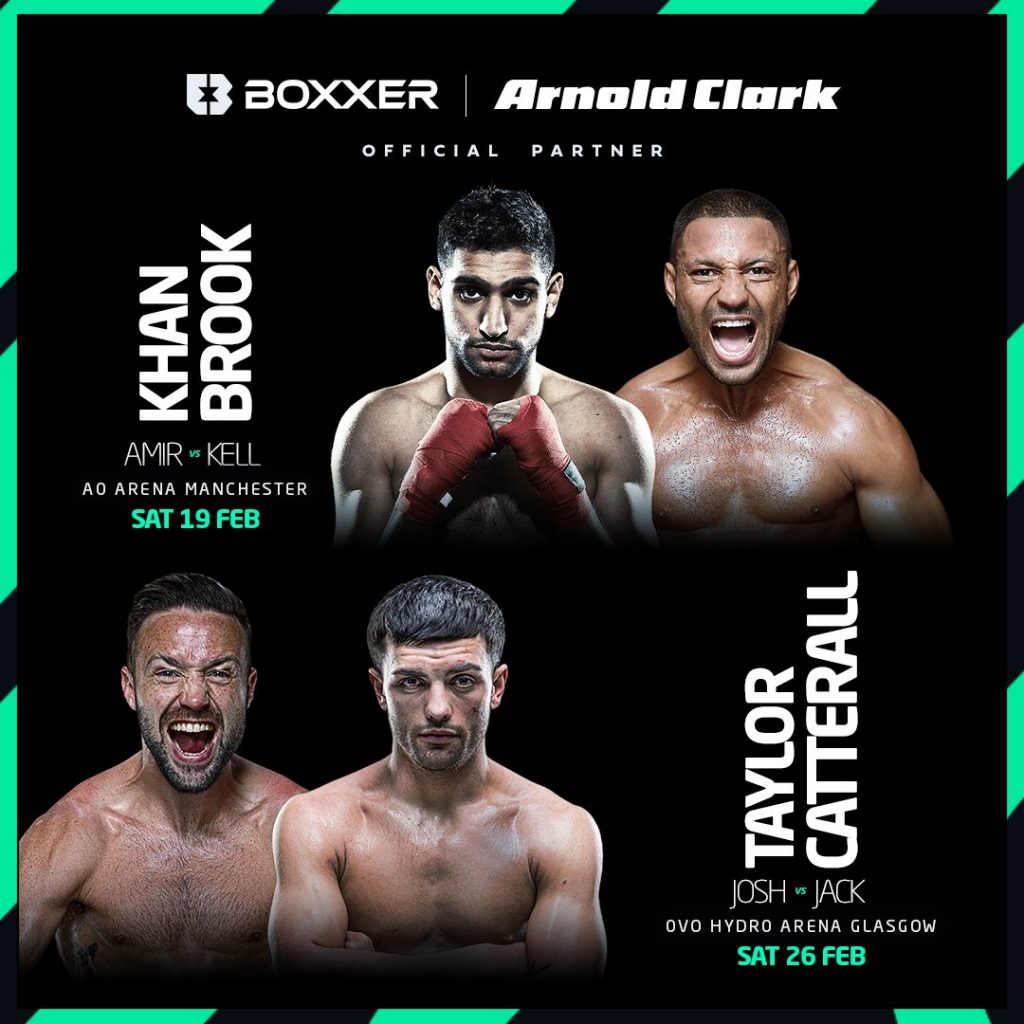 Arnold Clark Seals Major Partnership with BOXXER for Khan vs. Brook and Taylor vs. Catterall

BOXXER is delighted to announce a new partnership with car retailer Arnold Clark, for 2 blockbuster events this coming February: Amir Khan vs. Kell Brook on February 19th in Manchester, and Josh Taylor vs. Jack Catterall on February 26th in Glasgow.

With over 60 years’ experience in the industry, Arnold Clark is Europe’s largest independently-owned, family-run car retailer – priding itself on offering customer service of the highest level, as well as the best choice and biggest discounts on all new and used cars and vans.

Selling over 280,000 cars a year and boasting more than 200 dealerships across Scotland and England, Arnold Clark won Dealer Group of the Year in 2019; and provides a plethora of additional services including MOTs, parts, Motability, servicing, rental and business vehicle leasing.

Kicking things off in Manchester, Amir Khan and Kell Brook will face off in a pay-per-view event that has been years in the making, in one of the most highly anticipated match-ups in world boxing, airing LIVE and exclusively on Sky Sports Box Office in the UK & Ireland.

The iconic AO Arena in Manchester will play host to the most significant all-British clash in recent history, as two stars of the sport and former world champions go head-to-head. The undercard supporting the 50/50 main event – tickets for which sold out in a matter of minutes – includes a world title fight for Natasha Jonas, Olympic hero Frazer Clarke’s pro debut, and the highly-talented Azim brothers.

The following week at the OVO Hydro in Glasgow, in a co-promotion with global boxing powerhouse Top Rank, Scotsman and undisputed super-lightweight world champion Josh Taylor faces his mandatory challenger in the unbeaten Englishman, Jack Catterall.

In what is Taylor’s homecoming fight since winning the undisputed world titles in May 2021, he looks to cement his position as both one of the world’s best pound-for-pound boxers and the most gifted fighters of his generation. Tickets for the show sold out in rapid time once again, and it will be broadcast LIVE on Sky Sports in the UK & Ireland – featuring a stacked undercard made up of both BOXXER and Top Rank talent.

As part of the partnership, which was secured in collaboration with sport-specialist agency Matchday, Arnold Clark branding will appear prominently across all pre-promotional activity, including press conferences, open workouts and weigh-ins – including on-site automotive activations. This will lead up to 360-degree in-arena exposure on the two fight nights, with branding across the ring canvas, ropes, corners and toblerones; and the arenas’ screens, banners and boards.

Commenting on the partnership, BOXXER’s founder and CEO Ben Shalom said: “We’re delighted to announce this new partnership with Arnold Clark, ahead of two of the biggest events in British boxing. Amir Khan vs. Kell Brook is a grudge match like no other, and it’s a privilege to have one of the world’s best fighters in Josh Taylor defend his world titles on home soil. We look forward to working on these events with such a well-established and renowned brand in Arnold Clark.”

Russell Borrie, Arnold Clark Chief Operating Officer, said: “We are thrilled to be part of such momentous sporting events, and it’s a real pleasure to work with BOXXER. These are two of the most eagerly anticipated events in British boxing, featuring some of the world’s best fighters at the top of their game. Boxing fans will be tuning into these events from all over the world, and we’re delighted to showcase the Arnold Clark brand to new audiences far and wide.”