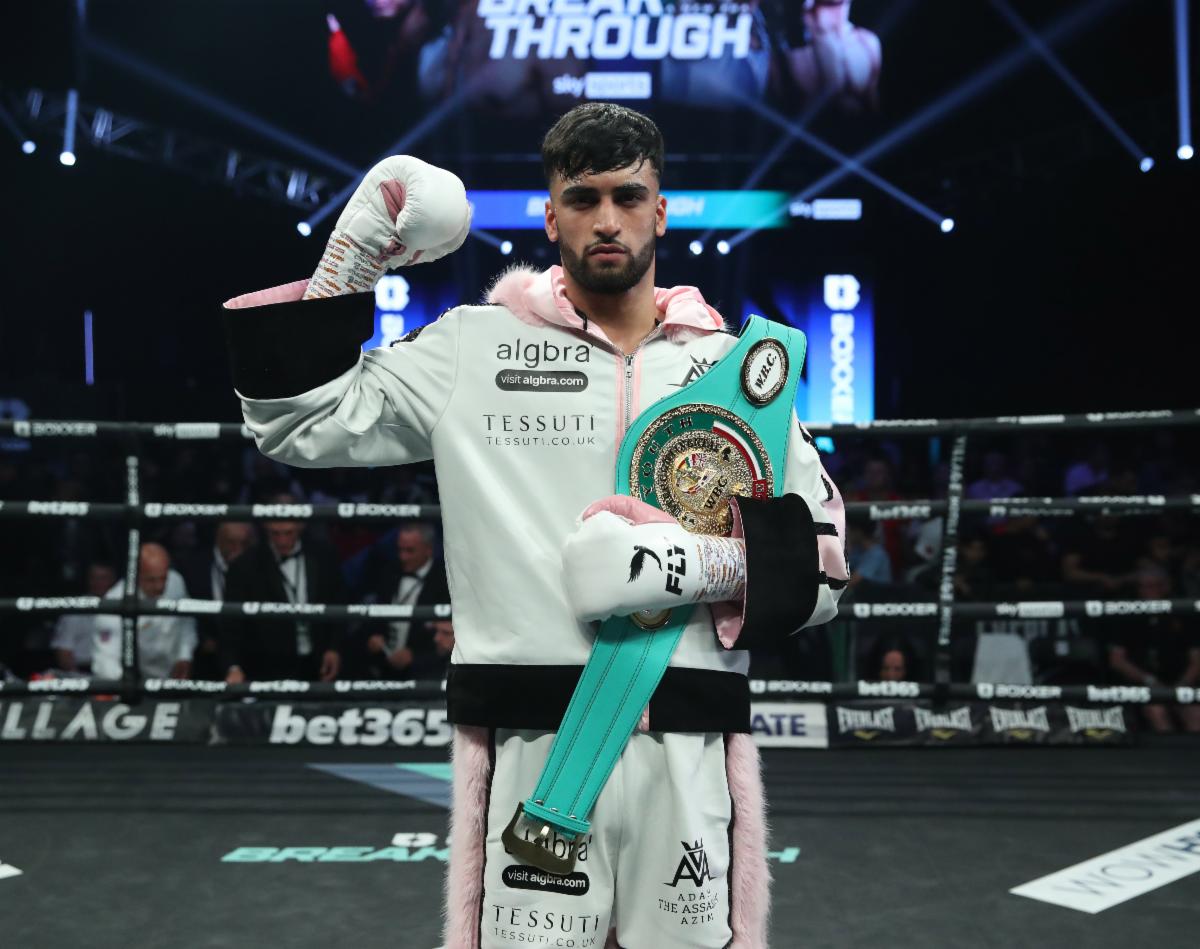 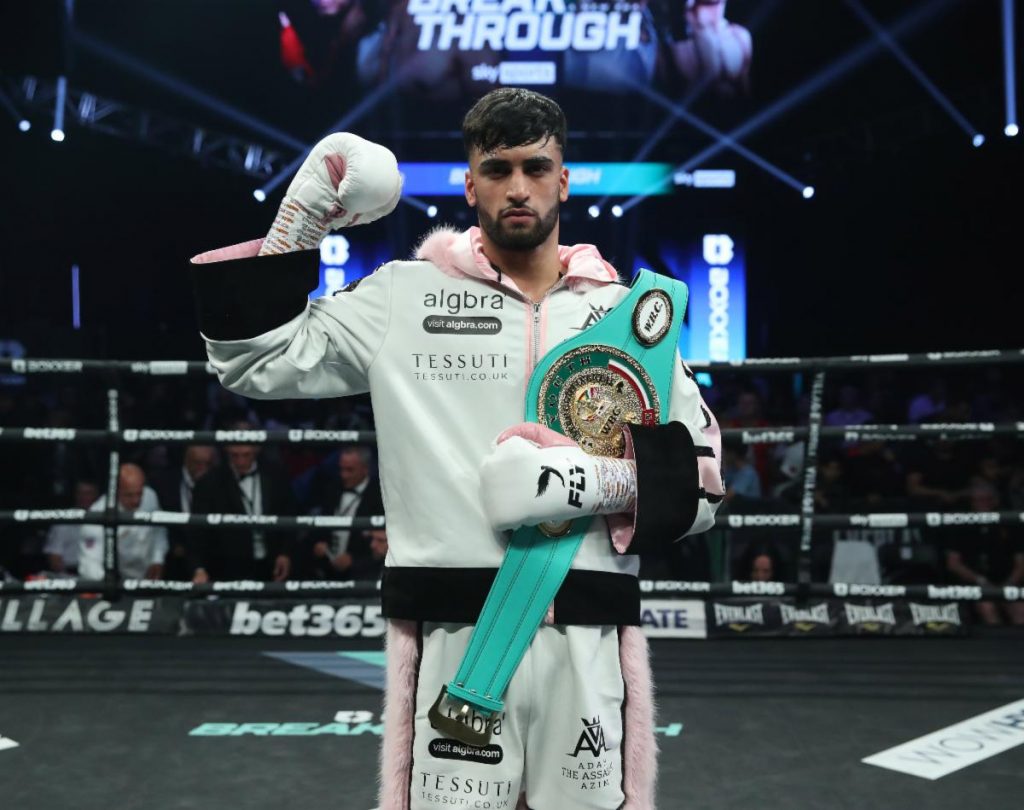 20-year-old lightweight sensation Adam ‘The Assassin’ Azim took another victory in the very first round with his TKO victory over skillful opposition in Anthony Loffet.

Azim floored Loffet within 35 seconds of the very first bell, after a series of inch-perfect 1-2 combinations, before piling on the pressure with powerful shots and forcing Loffet’s corner to throw in the towel, just 1 minute and 6 seconds into the first round, claiming the WBC Youth Intercontinental Super-Lightweight Championship.

The Assassin has put the public on notice with this stunning stoppage, while also headlining the first card of his career in only his 5th professional fight.

Shane Mcguigan’s claim that Azim is:”the greatest talent he’s ever trained,” is being proved correct and the young showstopper will be hungry to get in the ring again after two stunningly fast victories in his most recent fights.

Adam Azim has now cemented himself as one of the most exciting, talked-about prospects in boxing, and looks to have the potential to reach World Championship glory in his professional-boxing career. There will be a huge number of people watching his career with interest after tonight’s perfect performance.

Eggington pushed hard in the early rounds of the fight to find a way to stop Zysk, landing devastating combinations across the first four rounds of the fight. Eggington looked set for an early night and a stoppage victory but Zysk showed tremendous grit and determination to survive Eggington’s destructive onslaught.

Eggington used his boxing skill in the second half of the fight to win every single round of the final six. Allowing the new IBO World Champion to dominate the all three judges’ scorecards and claim victory. Zysk fought valiantly across all 12 rounds, despite the huge punishment taken early on in the fight, and made all of the last six rounds competitive.

Sam Eggington always leaves the crowd going home happy with his aggressive, hell-for-leather fight style, and did so again tonight with this fluid, intelligent performance. Eggington’s status as IBO Champion may be the key to earning even bigger fights soon.

Coventry’s own Dylan Cheema took a successful first victory among his passionate supporters since his victory at the BOXXER Series in April, moving his professional record to 6-0. Cheema outworked and outbattled a tough, game opponent in Stu Greener, who made the Sikh star fight hard for his victory.

Cheema once again had huge support in the Coventry Skydome from his zealous supporters, with his proud membership of the Punjabi Sikh community attracting followers from across Coventry and across the country.

‘The Natural’ signed with BOXXER after his BOXXER Series victory and will continue to build his young career to the very top of the Lightweight division across BOXXER shows in future.

Olympic Bronze medalist and special female Featherweight talent Karriss Artingstall made a successful professional debut that saw her take a shutout victory on the referee’s scorecard over an experienced opponent who’d been in the ring with top talent like Natasha Jonas and Caroline Dubois.

Artingstall didn’t put a foot or a punch wrong across the six rounds of the fight, landing stiff shots and fast combinations from the first to the last bell, dominating her opponent.

The Coventry Skydome came alive for this 10 round war between passionate rivals Tyler Denny and River Wilson-Bent, whose bad blood only built between this fight and their first that ended in a controversial draw.

Tyler Denny left no question in the minds of the public after this fight however, taking the victory in this close, explosive fight via a split decision on the judge’s scorecards. Tyler Denny can now proudly call himself the English Middleweight Champion.

The fight lived up to the expectations that built around it during the fiery exchanges between both men in the lead-up to the competition, and the 10th and final round especially electrifying the crowd and the viewing public, as both men gave absolutely everything until the final bell.

Former BOXXER Series winner Cori Gibbs returned to the ring for the first time since that tournament victory last November to extend his perfect record to 17-0. Gibbs produced a strong performance against high-quality opposition in Carlos Perez, who came into this fight with a strong winning record and was undefeated in his last four fights. Gibbs won all but one round on the referee’s scorecard and shook off any signs of ringrust after his recent layoff within seconds of the first bell ringing, landing fast combinations while making sure to receive little in return throughout the fight.

Gibbs will now look forward to more impressive fights under the BOXXER banner, first looking to step up to even stronger opposition and challenge for domestic titles against the best Super Lightweights in the UK.

Former Midlands Area Welterweight Champion Kaisee Benjamin gave a measured, intelligent performance in his six-round victory over a highly experienced opponent in Serge Ambomo. This performance sets Benjamin up well for big fights in future and ended a period of over half a year out of the ring.

Tall, powerful Middleweight, and new BOXXER signee, Shakiel Thompson convincingly won every single round in his fight with dangerous opposition in Bartosz Glowacki, who had won four of his career victories by stoppage.

Thompson used his natural size and range to dominate the fight on the outside, but also showed the grit and skill to land shots from closer ranges, doing serious damage to Glowacki when he did.

Thompson now looks on to better opposition and exciting opportunities in his new partnership with BOXXER.

Ireland’s Aaron McKenna proved once again why he is one of the hottest prospects in world boxing by moving to 15-0 as a professional at only 22 years of age. Mckenna consistently outclassed his opponent across the first six rounds, and produced a whirlwind of powerful shots to force the stoppage victory, becoming the only man to stop Benitez across his 15 professional bouts.

Powerful Cruiserweight and former Team GB amatuer star Scott Forrest took another devastating stoppage victory in only the second fight of his career, moving to 2-0.

Visic’s corner was forced to throw in the towel in the 4th round after a brutal right hand from Forrest sent him tumbling to the canvas. Forrest has already shown serious boxing skill and fierce punch-power in these first two fights, and looks set to continue to do so in future.