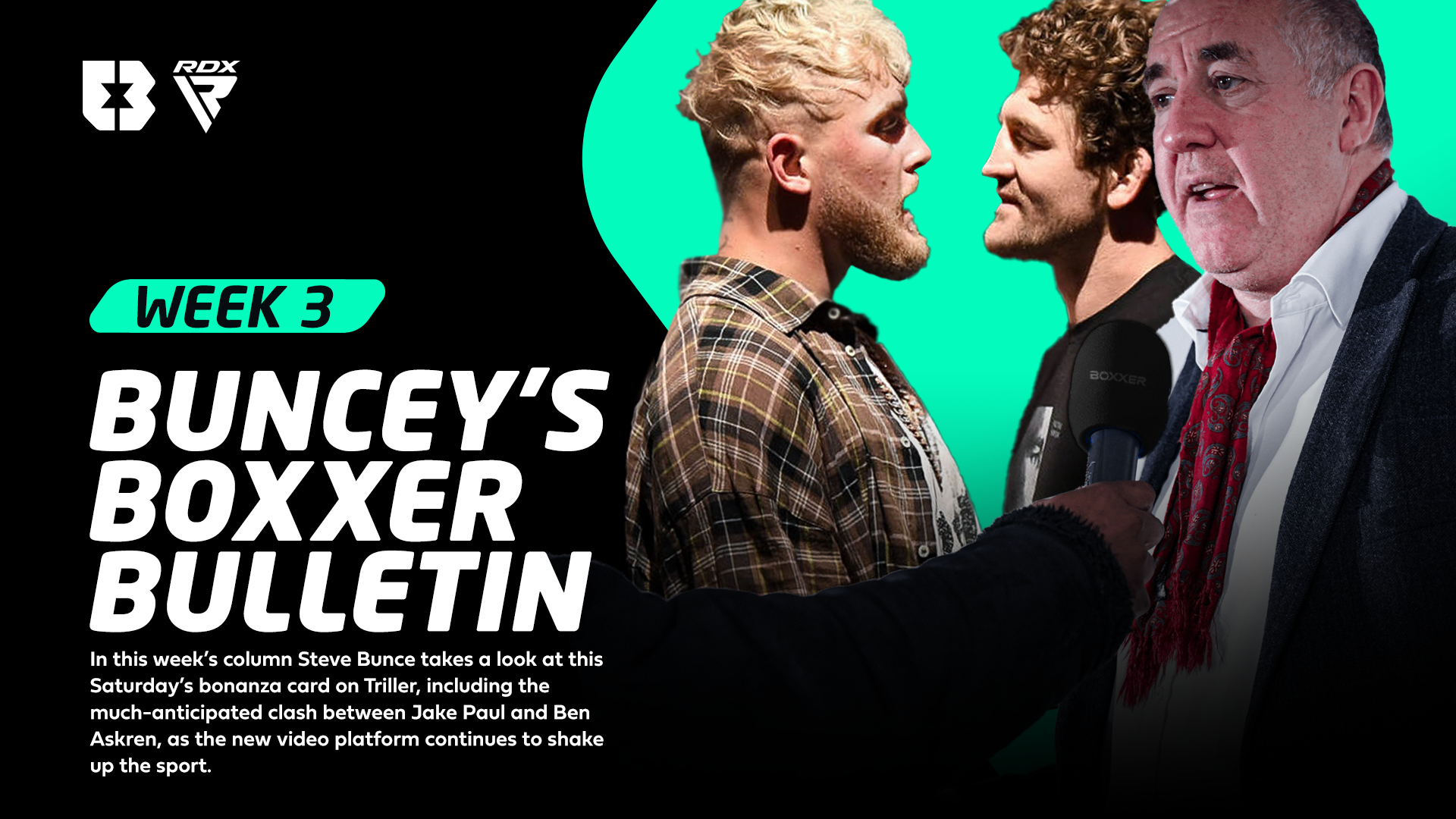 In this week’s column, presented by RDX Sports, veteran columnist Steve Bunce takes a look at this Saturday’s bonanza card on Triller, including the much-hyped clash between Jake Paul and Ben Askren, as the new video platform continues to shake up the sport.

Last year, Snoop Dogg laughed his way through the exhibition/fight between Roy Jones and Tyson, which was a Triller production; it generated $80M in pay-per-view revenue.

The fight was a good watch and the business of mixing old fighters, veterans from other sports, top current boxers and celebrities was firmly established. Only a cynic in denial can ignore this mayhem.

Triller is back in Atlanta on Saturday, when Jake Paul fights with a boxing licence for the third time when he meets genuine MMA veteran, Ben Askren. It’s the main attraction on the Triller show and – I have to say – it is intriguing. Can a YouTube, actor, playboy, comic actually beat a man who has been fighting professionally under the lights for over a decade?

Part of me, the sensible boxing part, tells me that Askren can walk through Paul, hold, hug, hit away and then break him. Askren was a winner in MMA for a decade, an Olympian wrestler in 2008 and he is a hardman.

“I took up boxing just two years ago and I will still knock him out,” threatened Paul, who is the Triller attraction with his millions of online fans.

This Saturday’s undercard is, frankly, ridiculous. I love it.

A former barman from Twickenham called Joe Fournier, who is now an international nightclub owner, defends one of his many belts. Fournier has built a boxing reputation in that twilight zone where crazy fights are sanctioned and made legitimate by weak governing bodies. Fournier is classic Triller.

Regis Prograis, arguably the number two light-welterweight in the world, is in a very real fight with Ivan Redkach. It could be a genuine top-of-the-bill fight anywhere this Saturday.

This will cost seventeen quid in the UK and $49.99 in America to watch. In Miami, on the same day, unbeaten WBO middleweight champion, Demetrius Andrade, meets his mandatory, Liam Williams.

That fight will cost you just £1.99 to watch in the UK and that fee is for a month of live fights from all over the planet. Make no mistake, Triller are up for a fight.

Back in February, the game seriously shifted when Triller bid $6,018,000 for the next Teofimo Lopez world title fight. This bid was no laughing matter for boxing purists; Lopez’s promoter, Bob Arum, only bid $2,315,000. There is now a rift between Lopez and Arum.

Lopez will fight Australia’s number one contender and arguably the luckiest man in boxing, George Kambosos, in late May or early June. George, a nice guy, will get $2,106,300 for his world title challenge and that is genuinely crazy money. Evander Holyfield, who is now 58, will be on the bill, a warm-up for his inevitable third fight with Mike Tyson. Yep, it’s mad, but you will watch.

Remember, if Snoop Dogg is there, if they swear, if there is a heavyweight from the Eighties and there is a massive purse bid, you know it’s a Triller show.